Serology, refers to considering serum and fluid of the body. In this part, antibodies are detected. So, in order to detect an infected diseases, microbes are separated from the patient. Factors such as, age of the patient, using medication, stage of disease and so on affects on result of the tests.

Separating microbe from patient. But due to using anti- bacterial drugs or problems related to separating and cultivating the microbe, this process will be difficult, and makes the diagnosis problematic. in such ways, the best way is to finding specific anti- bacterial antibodies in patient’s serum.

Now, serology, is one of the most simple and fast methods of diagnosis diseases. This test is so important, due to changes that occur in titr of the antibodies during the disease, and doctors can control any changes in your body. In other word, decreasing titr of the antibody, is an indication of proper treatment. 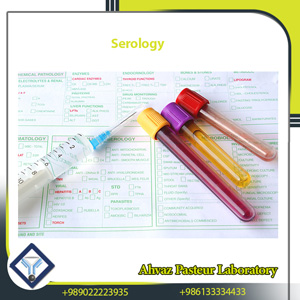 When result of test is not match with clinical condition of the patient, this test should be done 2 times, with 2 weeks intervals to compare titr of the antibody.

Following factors affect on interpretation of the test:

Tests which are done in this part are as:

Haas flocculation reaction: When the antigen is colloidal (such as cardiolipin, which is made from a beef heart extract and used in the VDRL test), the reaction is called flocculation.

The Vidal test is for the diagnosis of typhoid and paratyphoid disease. The cause of this is the infection with salmonella bacilli from the intestinal bacilli. These bacilli enter the human body through the digestive system and cause the following diseases:

1- Typhoid fever and parathyroid gland known as intestinal fever
2- Septicemia and infection of the blood
3- Food poisoning
Typhoid and parathyroid bacilli can be isolated from blood, feces, and urine, respectively, before the Vidal test is positive. Gradually, the antibody titer rises. Positive microbial cultures are also reduced if, after four weeks of germicide entry, 90 to 95% of the patients will experience a Vidal test.

The microorganism or antigen of H is measurable. The antigen of the O gene is also known to have a greater degree of lipopolysaccharide and its anticorrosive antigens than the IgM class and plays a role in the pathogenesis of the microbe. The antigen of the H gene is derived from protein, IgG class.
Another anti-venous polysaccharide Vi is found in salmonella typhi and para-typhi bacilli. The antibody against it is of the IgM class and appears later than the antigens O and H.

It is better to be fasting for this test.
Avoid hemolysis of the sample because hemolysis interferes with the test results.
Diagnosis of febrile illness based on active or direct agglutination. These experiments are carried out in two quick ways on the tube and the tube in the tube.

Wright’s test is used to detect the serology of brucellosis or bruising which is the result of the brucella microbes in humans and most animals. Human beings are more likely to be infected by direct contact with sick animals or taking milk and milk products contaminated with brucellosis. Antibodies that appear in serum against the surface antigens of brucella are IgG, IgM and IgA. At the end of the first or second week of the acute phase, IgM and then the specific IgG are raised, and after a few weeks, the titre also increases with IgM.

Typically, during the fourth to eighth weeks, the acute phase of the disease will reach its maximum level of antibody titre. If the appropriate treatment is performed, the IgG titre is reduced, but there is no change in the IgM titre. However, if the treatment is not appropriate, the disease enters the chronic phase, and in this case, the positive serum head is often related to the IgG antibody.

This test is recommended if the result of the Wright test is negative and the physician suspects that patient is entering to the chronic phase of the disease. In the chronic phase of the disease, sometimes anti-brucella antibodies, which do not have agglutination ability, are found in the patient’s serum. These are from the class of IgG or sometimes IgA, termed the term antibody blocking or defective.

This test is performed after positive Wright test to identify the antibody class. The most important use of this test is the differential diagnosis of inactive active brucellosis in a person with clinical manifestations of the disease, but his blood culture is negative and the tithe of his burn test is also low. In addition, by performing this test, the appropriate antibiotic effect can be studied in the treatment of the disease.

Rheumatoid arthritis is a chronic disease of the local immune complex and is considered as an autoimmune disease. The disease is more common in middle-aged and elderly people, but it’s also known as Juvenile Rheumatoid Arthritis in children. In the serum, about 60-88% of patients with rheumatoid arthritis, an autoantibody of IgM, called rheumatoid factor, appear against the Fc region of human and rabbit IgG molecules.

CRP is a non-specific, reactive protein and is used to diagnose bacterial infections and inflammatory disorders such as rheumatic fever. From acute phase proteins, the measurement of CRP due to its rapid increase at the onset of tissue lesion and its rapid reduction immediately after recovery is the best way to detect tissue lesions.