Pituitary gland is one of the most important intrathoracic tubules located beneath the brain and connected to the third ventricle of the brain. This small gland causes a lot of vital activity in our body. The pituitary consists of the two lobes (posterior) and the anterior (former) lobes, which are itself under the influence of the hypothalamus.

This part of the building has no glands, but part of the nervous system that is made up of axons. The cellular bodies of these axons are in the hypothalamus of the brain. Antidiabetic hormones and oxytocin are made in the cellular body of the hypothalamic neurons and transmitted through the axons to the posterior posterior pituitary and stored along with the neurofazin I and II proteins.

The hormone is a peptide that stimulates water reabsorption from kidney tubes and urinary retention in the kidney. This hormone together with neurophysin II is stored in the later part of the pituitary. Lack of it leads to insipid diabetes.

The hormone is a peptide that causes smooth uterine muscle contraction (ease of delivery) and milk ducts (lung eruption). This hormone is reserved for neurofazine I in the later part. There are oxytocin receptors in the uterus and mammary glands. Progesterone inhibits oxytocin secretion. 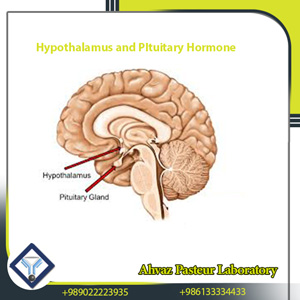 The hormone is secreted by the cells of the previous pituitary and plays an important role in regulating growth. Growth hormone plays an important role in the body’s anabolism by increasing protein synthesis, increasing fatty acid decomposition in adipose tissue and increasing blood glucose levels. This hormone also increases the absorption of calcium, magnesium and phosphate in the body, leading to bone growth along the length and diameter of the bones.

Prolactin is a hormone secreted from earlier pituitary cells and has a structure similar to that of a growth hormone. The main task of prolactin is to stimulate the development of breast and to start and continue lactation.

The main inhibitor of GH is dopamine, which inhibits the secretion of this hormone from the pituitary. In humans, the levels of this hormone increase naturally during sleep, stress, exercise, sexual proximity, hypoglycemia as well as pregnancy, lactation and postpartum.

Increasing prolactin in women is usually associated with decreased libido, disorder, or menstruation, breast infections, and infertility, and in men, loss of sexual desire, breast enlargement, hypogonadism, and infertility.

ACTH hormone secretes from the previous pituitary and increases the cortisol and aldosterone secretion from the cortical part of the adrenal gland. Cortisol is an important glucocorticoid that plays a key role in the metabolism of glucose and the body’s response to stress.Cortisol is a hormone that coordinates the functioning of the hypothalamus, pituitary, and superficial kidney. In this way, reducing cortisol levels secretes CRH from the hypothalamus and CRH, increases the secretion of the adrenocorticotropin hormone (ACTH) from the pituitary.

Measuring the amount of ACTH in the study of increasing or decreasing blood cortisol and assessing the hormonal impairment caused by impaired adrenal or pituitary function is helpful.

In the morning sample: <80 pico grams per ml

In the afternoon sample: <50 pico grams per ml

The secretion of this hormone is regulated by the hypothalamic TRH hormone. TRH is the major stimulant for the synthesis and secretion of TSH. Approximately 15 minutes after administration of TRH, the amount of TSH secretion reaches its maximum. Reducing the levels of thyroid hormones increases TSH production and exacerbates the TRH stimulation effect on TSH. Increasing levels of thyroid hormones also rapidly and directly inhibit TSH and inhibit the TRH stimulating effect on TSH.

Follicular stimulatory hormones (FSH) and Lotropin (LH)
FSH and LH are FSH and LH, which are glycogenic hormones that are secreted and bleeding in the early stages of the pituitary. The gonadotrophin releasing hormone (GnRH), released from the hypothalamus, regulates these hormones through the post-rolling mechanism.

The level of these hormones varies in women during menstrual cycles and is secreted at different times. The maximum amount of FSH in the cycle is for the formation of the oocyte follicles, and at the same time, the LH reaches peak levels to stimulate ovulation, which results in the formation of a yellowish body that, if fertilized, can protect the fetus.