Flow cytometry Test, is an accurate and high-performance method used to identify cells and evaluate their properties. This technique is based on the diffusion of light by the cells tested and the fluorescence emission of them. Fluorescence emission is obtained directly by using fluorochromes attached to cellular components or a mixture of fluorescent dye with monoclonal antibodies. These fluorescence conjugated antibodies can detect and attach surface molecules or internal combinations of cells and make it possible to identify cell types in a diverse cell population by flow cytometry. Flow cytometry is widely used in research departments and diagnostic laboratories and is used to diagnose and determine the prognosis of diseases as well as to evaluate the treatment of malignancies. 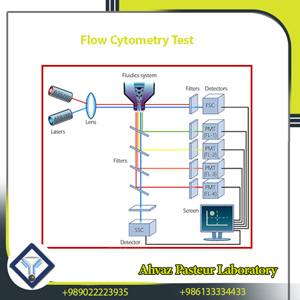 Flow Cytometric General Principles
In this method, stained cells (by using a monoclonal antibody attached to fluorescence or fluorochromes) are placed in a fluid stream and pass through each other in the direction of an optical beam (laser). The laser light is scattered to the detector after collision with the cell either in the forward scatter and perpendicular to the side scatter axis, and it comes either from the fluorochrome attached to the particle surface, in which case the surface-bound fluorochromes Or inside the cell is stimulated by laser light irradiation and absorbs the light-emitted light energy and then releases fluorescence radiation at another wavelength. The diffusion of light at different angles can differentiate cells from differences in size and complexity, while fluorescence emission from fluorescent labeled antibodies can differentiate cells based on differences in surface and cytoplasmic antigens. Cells are then differentiated according to characteristics such as volume, granulation and color saturation.

The flow cytometry device measures the type and amount of fluorescence, as well as the degree or path of dispersion of light beams. Following the measurement and analysis of the parameters obtained from the cell or the particle passing through the light rays, information is obtained about the size, shape, structure of the cell or particle studied. Also, if a cell or particle is stained with one or more fluorescence fluorescens (fluorocrests or fluorophores), the light rays will spark these colors, and in this way, in addition to the findings of cell size and structure, information related to the metabolic activity , DNA content, presence of specific surface or intrinsic cells. The precision optical and electronic components of the flow cytometry collect fluorescence signals and diffused light rays by appropriate lenses, then direct the appropriate detectors using the appropriate filters of each of the optical signals. Detectors converted optical signals into electrical signals (proportional to the light gathered), and then the signals are processed and analyzed by the software. Of course, some flow cytometry devices are also capable of detecting and separating cells and particles. Some of these cell separators
They can detect 70,000 cells per second and isolate them in separate tubes.

The number of fluorochromes used in flow cytometry has been increasing over the years. Understanding different types of fluorochromes and knowing their advantages and disadvantages is the only way to make optimal use of scientific-research goals. Today, a variety of fluorochromes are used to color the cells and their internal components.

Flow cytometry devices were able to analyze only one or two fluorescence fluorescens, but today there are devices that can detect and process eleven fluorescence colors simultaneously. Concurrent improvements in devices, the production of monoclonal antibodies, fluorescent dyes, computers and software, a new valve for flow cytometry technology, has been opened in clinical laboratories.

The main components of the flow cytometer system

The Fluidics system, in a flow cytometric method, to examine the cells, they must be in a queue, individually and in a suitable fluid, suspended from the light (laser). In general, the Fluidics system enters the flow of cells slowly into the Sheath fluid.This phenomenon, which produces unique information from a particle or cell in the flow cytometer, is called the “Hydrodynamic focusing” effect. The flow rate of the sample in a flow cytometry is 5 to 50 meters per second, and the ability to collect data from 5,000 to 50,000 cells per second.

An optical system (optics), this system typically consists of one or more light sources (a laser or arc lamp) with a number of lenses, filters, and detectors. Lenses and filters are used to centralize and transmit light source to the measuring point, as well as to collect and direct the scattered light signals and photoreceptors emitted from the measuring point to detectors.

The electronics sector, includes optical signal transducers to electronics signals that can be processed by a computer. When optical signals are transformed into electronics, standardized flow cytometric format (FCS) templates are used to store data from electronic signals and use these software to collect data and process them, draw single graphs, Two or three-dimensional information, or to perform mathematical and statistical calculations on the information.

In order to allow high sensitivity flow cytometers to detect dispersed laser light or fluorescence released from a cell among cell types, cells need to be uniformly suspended in a liquid medium. Sample suspension preparation methods vary depending on the type of cell being evaluated. After preparing the appropriate suspension, the cells are labeled directly with fluorochromes or fluorochrome-linked antibodies.

Each cell, in terms of its type and expertise, expresses its own molecules. Most of the subgroups of the cells in the human blood express their own specific surface markers that can help them identify them.

The minimum required volume of the sample depends on the amount of cells in the cells of the sample, and if the percentage of the cells examined is low compared to the other cells, then part of the unwanted cells must be removed first. The diameter of the evaluated cells should be in the range of 1 to 30 microns, and ordinary flow cytometers should not be sensitive to the evaluation of particles smaller than 1 micron.

Designing and performing the test properly involves the selection of appropriate antibodies and the selection of fluorochrome in proportion to the concentration and position of the antigen, the proper application of the cell sample preparation, and the precise adjustment of the device requires the experience and information that the person carrying out the test must have.

Selection of the desired cells and the removal of the results associated with unwanted cells such as Dead and Deberman cells is one of the most important flow cytometry principles known as Gating. Each flow cytometry system provides a special software for receiving, displaying and analyzing data on a computer. Your device has its own. This software will display the final results of the data analysis as a graph.

In this type of graph, each point represents a particle, and each population is cumulative of particles in compact or low density. The position of these particles on the chart is based on the intensity and weakness of the signal generated by them and the signal received by the detector. 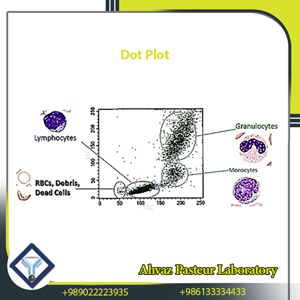 In this chart, the density of the points that represent the cell population are shown in different colors

The accumulation of points (cells) is represented in lines and looks like geography maps.

In contrast to the previous diagrams that simultaneously analyze two parameters, in this chart, the measurement of a parameter (relative fluorescence of light scattering intensity) on the X-axis and the number of particles (cells) on the y-axis is shown.

Determine the minimum signal amount, for registration by the detector, is called the threshold. This means that signals that are equal to or greater than the user-specified value are displayed, that is, only signals registered in the detector whose value exceeds the threshold.